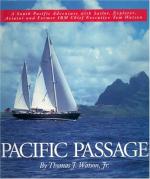 Thomas John Watson, born on February 17, 1874, was neither an inventor nor a technician, but his contributions to computer science were substantial nonetheless. During Watson's forty-two years of leadership at IBM Corporation, his marketing and management skills and his emphasis on research and development helped create the Computer Age. He died on June 19, 1956.

The fifth child of an immigrant Scots-Irishman, Watson was born in a four-room cabin in Painted Post, New York. He showed no affinity for the family farm and lumber business and chose to study business and accounting instead. After a year at the Miller School of Commerce in Elmira, New York, he accepted a bookkeeping job at the then relatively high salary of $6 a week. He was seventeen years old.

The job was shortlived, however, as Watson succumbed to the lure of the open road...

Watson, Thomas J., Sr from Macmillan. Copyright © 2001-2006 by Macmillan Reference USA, an imprint of the Gale Group. All rights reserved.