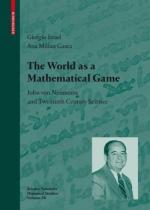 This encyclopedia article consists of approximately 3 pages of information about Von Neumann, John.

John Louis von Neumann was one of the great pioneers of computer science and mathematics during the twentieth century. Known for his concept of the stored computer program, he performed work that paved the way for the powerful and ubiquitous electronic computers of the early twenty-first century. His work on the Institute for Advanced Studies (IAS) computers built the foundation for what is now known as the "von Neumann Architecture." This architecture resulted in the development of powerful supercomputers employed by government, universities, and other institutions.

Von Neumann was born December 28, 1903, in Budapest, Hungary, and died February 8, 1957, in Washington D.C. During his youth, he was often referred to as a prodigy, having published his first technical paper at the age of eighteen. He began attending the University of Budapest in 1921, where he studied chemistry, receiving...

Von Neumann, John from Macmillan. Copyright © 2001-2006 by Macmillan Reference USA, an imprint of the Gale Group. All rights reserved.