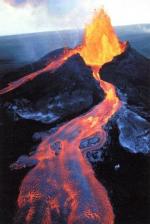 This encyclopedia article consists of approximately 2 pages of information about Volcanic Vent.

Volcanic vents are openings in Earth's crust where molten lava and volcanic gases escape onto the land surface or into the atmosphere. Most volcanoes have a circular central vent near their summit crater that serves as a conduit for ongoing volcanic construction. Basaltic lavas that cool to form oceanic crust, oceanic plateaus, and continental flood basalts erupt from large, elongate, planar vents called fissures. New oceanic crust is created at axial fissures along the globe-encircling ocean ridge system. Small cracks and ducts in volcanic and hydrothermal provinces serve as vents for escaping lava, gas, and water that create smaller-scale volcanic features like gaseous fumaroles, hot springs, geysers, and rootless splatter cones called hornitos.

Each of the three main types of volcanoes—cinder cones, shields, and composite volcanoes—forms by eruption of lava, volcanic ash and gases from a central vent. A cinder cone, like Volcan Parícutin in Mexico, begins with an eruption from a vent in the land surface and grows into a steep-sloped, circular mountain as cinders from successive eruptions form a cone around the vent. Shield volcanoes, like the Hawaiian Islands, are composed of low-viscosity basaltic lava that flows easily and rapidly from a central vent. Though sometimes very large, shield volcanoes have a simple structure of stacked, low-angle lava flows around the central vent.

Composite volcanoes, or stratovolcanoes, are very large volcanic edifices composed of alternating layers of volcanic ash, volcanic ejecta and lava flows. Mt. Rainier in Washington, Cotopaxi in Ecuador, Mt. Etna in Sicily, and Mt. Fuji in Japan are stratovolcanos. Extremely large, pyroclastic eruptions of gas-charged, viscous lava issue from a central vent, or group of vents, in the summit crater of a composite volcano. However, because the andesitic and rhyolitic lava that composes a stratovolcano is so viscous, the central vent system is often plugged between large eruptions. Lava fills

fissures on the flanks of the mountain creating radial dikes. Gases and fluids also escape from secondary vents, creating fumaroles and hot springs on the slopes of a stratovolcano. When a composite volcano becomes dormant, erosion wears away the volcano, leaving the vertical column that cooled in the feeder duct beneath the volcanic vent. Shiprock in New Mexico and Devil's Tower in Wyoming are examples of volcanic necks that formed this way.

More summaries and resources for teaching or studying Volcanic Vent.

Volcanic Vent from Gale. ©2005-2006 Thomson Gale, a part of the Thomson Corporation. All rights reserved.