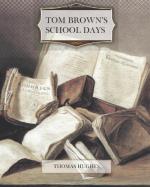 Tom Brown's Schooldays - Research Article from Literature and Its Times

Dwring his youth, Thomas Hughes, a descendant of a prestigious family, was shuffled here and there in search of a suitable education institution. He finally settled at the English Public School in Rugby, where a transformation of education was taking place. Young Thomas matured under the watchful guidance of Thomas Arnold, a man known as the Doctor. Long regarded as an educational reformer and the savior of the historic Christian public school, Arnold helped Hughes and myriad other students to mature during his lifelong quest to produce good, moral, and Christian Englishmen. The experiences of a student in one of the public schools later became the subject of Hughes's novel Tom Brown's Schooldays.

The English public school system. In their present forms, English and American public schools differ. In the United States...

Tom Brown's Schooldays from Gale. ©2008 Thomson Gale, a part of the Thomson Corporation. All rights reserved.