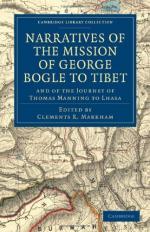 This encyclopedia article consists of approximately 4 pages of information about Thomas Manning.

Thomas Manning was the fourth Westerner and the first Englishman to visit Lhasa, the capital of Tibet and the center of Lamaism, a Buddhist sect. He became interested in Tibet through his study of the Chinese language. His accounts of his experiences in Lhasa provide valuable information about the city during a period when foreigners were forbidden entry.

Manning was born the son of a clergyman in the English county of Norfolk on November 8, 1772. He enrolled at Cambridge University in 1790 and studied mathematics there until 1795 but never received a degree. He remained in Cambridge as a private tutor until 1800, when he went to Paris to learn Chinese. Manning stayed in Paris for three years, studying the language under a notable scholar of the day. When war broke out between Great Britain and France in 1803, he was given a...

More summaries and resources for teaching or studying Thomas Manning.

Thomas Manning from UXL. ©2005-2006 by U•X•L. U•X•L is an imprint of Thomson Gale, a division of Thomson Learning, Inc. All rights reserved.