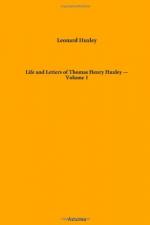 Thomas Henry Huxley - Research Article from Science and Its Times

This encyclopedia article consists of approximately 3 pages of information about Thomas Henry Huxley.

T. H. Huxley was a major figure behind the propagation of Darwin's theory of evolution and a noted advocate of science education. Huxley contributed to the growing study of the classification of organisms by studying fossils. He was instrumental in shifting the emphasis in paleontology away from geology (the study of the rocks in which fossils were found) to biology and the study of the structure of the fossil itself.

Huxley had little formal education as a youth. Instead, he taught himself by reading scientific and religious works, studying nature, and doing experiments on his own. In 1841 he became an apprentice to his physician brother-in-law, and the next year was awarded a scholarship to London's Charing Cross Hospital, allowing him to gain intensive study of anatomy and physiology as well as the scientific method. After graduating in 1845, Huxley...

Thomas Henry Huxley from Gale. ©2005-2006 Thomson Gale, a part of the Thomson Corporation. All rights reserved.