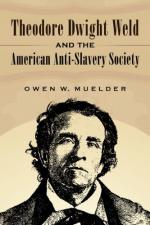 This encyclopedia article consists of approximately 1 page of information about Theodore Dwight Weld.

Author of the influential book
American Slavery as It Is

Theodore Weld. (Courtesy of the Library of Congress.)

Theodore Dwight Weld was a leading abolitionist (person who worked to put an end to slavery) during the years of heated debate over slavery that led to the Civil War. He was one of the most effective opponents of slavery during the 1830s, when the abolitionist movement was just beginning to gain ground in the Northern United States. He converted thousands of people to the cause with his passionate speeches and powerful books. But in the 1840s, long before the issue of slavery was resolved, Weld disappeared from view. Poor...

Theodore Dwight Weld from UXL. ©2005-2006 by U•X•L. U•X•L is an imprint of Thomson Gale, a division of Thomson Learning, Inc. All rights reserved.