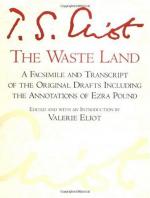 The Waste Land - Research Article from Literature and Its Times

T. S. Eliot
This encyclopedia article consists of approximately 13 pages of information about The Waste Land.

Thomas Stearns Eliot was born in 1888 in St. Louis, Missouri, and died in 1965 in England. Between these two dates, he transformed himself from an American philosophy student to a powerful British man of letters, and in the process also transformed modern English poetry. The Waste Land was first published in 1922 in the shadow of World War I and the chaotic, depressed culture of rebuilding and reflection that followed it. The poem became one of the key works of "modernism," an important artistic trend of the early-to-mid 1900s that sought to break with traditional forms and in post-World War I works often reflected a sense of disillusion with the modern world.

The Waste Land from Gale. ©2008 Thomson Gale, a part of the Thomson Corporation. All rights reserved.