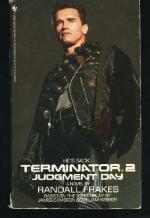 James Cameron
This encyclopedia article consists of approximately 1 page of information about The Terminator.

The Terminator is one of the most popular robots of film. There are actually two models of Terminator: the metal skeleton covered by human flesh (technically a cyborg) first seen in The Terminator (James Cameron, 1984); and the liquid metal, shape-shifting new T-1000 introduced in the sequel, The Terminator 2: Judgment Day (Cameron, 1991). Both were created by Stan Winston, following Cameron's designs. The older Terminator (Arnold Schwarzenegger) comes from the near future to kill Sarah, the mother of the still unborn John Connor, who will become the guerrilla leader that fights the rebellious machines in a future war. In the sequel, this evil Terminator becomes the fatherly protector of mother and son, saving them from the murderous T-1000. The Terminator films have appealed to the popular imagination thanks to their special effects (especially the infographics of the sequel) and the magnetic presence of Schwarzenegger in the title role.

Arnold Schwarzenegger as the Terminator in a scene from the film Terminator 2: Judgement Day.

More summaries and resources for teaching or studying The Terminator.

The Terminator from Gale. ©2005-2006 Thomson Gale, a part of the Thomson Corporation. All rights reserved.