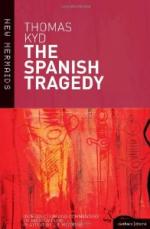 The Spanish Tragedy - Research Article from World Literature and Its Times

Thomas Kyd
This encyclopedia article consists of approximately 19 pages of information about The Spanish Tragedy.

Thomas Kyd (1558-94) is the most shadowy, least-known member of the first generation of great English dramatists, the generation that featured Christopher Marlowe and William Shakespeare. The son of a London scrivener (essentially, a legal secretary), Kyd was educated at Merchant Taylors School, where the poet Edmund Spenser was among his classmates. He seems to have joined the theatrical world in the 1580s after finishing school. Although he presumably wrote a number of plays, his fame rests on The Spanish Tragedy, one of the first popular triumphs of the emerging London theater.

Imperial Spain. In the sixteenth century, Spain was arguably the most powerful country in the world; certainly, it dominated Europe. Kyds play does not attempt a treatment of actual Spanish politics or history; indeed, his scenario of war...

The Spanish Tragedy from Gale. ©2008 Thomson Gale, a part of the Thomson Corporation. All rights reserved.