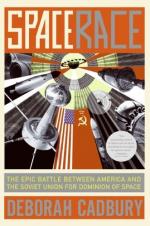 This encyclopedia article consists of approximately 6 pages of information about The Space Race and the Cold War.

At the end of World War II, the United States and the Soviet Union began a decades-long battle for political, military, and technological superiority. In the absence of any real fighting, space exploration provided a focus for the competition between the two superpowers. From the 1950s to the 1970s the United States and the Soviet Union raced to conquer space, but when tensions eased between the two nations in the 1970s, the urgency of winning the race declined and the race ended with the superpowers cooperating on several projects.

The United States and the Soviet Union emerged from World War II as adversaries in the Cold War—an open rivalry in which the two nations vied for political power and standing in the world without ever fighting an actual battle. Instead, they fought with...

More summaries and resources for teaching or studying The Space Race and the Cold War.

The Space Race and the Cold War from Gale. ©2005-2006 Thomson Gale, a part of the Thomson Corporation. All rights reserved.