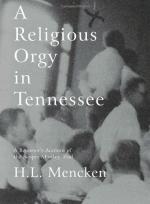 This encyclopedia article consists of approximately 7 pages of information about The Scopes Trial Highlights the Battle Over Evolution.

The Scopes "Monkey Trial" is the best-known example of the conflict over the teaching of evolution in the United States. Even though most scientists in the 1920s were sure that biology could not be taught without reference to evolution, Christian fundamentalists saw evolutionary theory as a rejection of religious belief. In 1925 Tennessee passed the Butler Act, which made the teaching of evolutionary theory illegal within the state. High school teacher John Thomas Scopes (1900-1970) was tried and convicted in Dayton, Tennessee, for teaching "the theory of the simian descent of man." The Butler Act was not repealed until 1967.

When Charles Darwin's (1809-1882) On the Origin of Species was published in 1859, both theologians and scientists were divided about Darwin's theory of evolution, especially his arguments about human origins. Even some supporters of evolutionary...

More summaries and resources for teaching or studying The Scopes Trial Highlights the Battle Over Evolution.

The Scopes Trial Highlights the Battle Over Evolution from Gale. ©2005-2006 Thomson Gale, a part of the Thomson Corporation. All rights reserved.