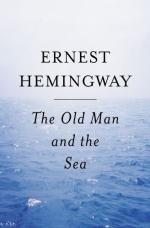 Ernest Hemingway
This encyclopedia article consists of approximately 11 pages of information about The Old Man and the Sea.

Ernest Hemingway spent more than twenty years of his life living in Cuba. From his home in San Francisco de Paulo, Hemingway often visited Cojimar, the village featured in the novel The Old Man and the Sea. An avid fisherman, Hemingway spent a great deal of his time in Cuba fishing for shark and marlin. His respect for the tireless fishermen of Cuba and their daily struggle for survival upon the sea prompted him to write this novel, which extols the spirit of the individual as well as the virtues of determination and courage.

Marlin fishing in Cuba. The waters off the coast of Cuba support an abundance of game fish, most notably marlin, which is also known as spearfish or sailfish. The migratory habits of...

More summaries and resources for teaching or studying The Old Man and the Sea.

The Old Man and the Sea from Gale. ©2008 Thomson Gale, a part of the Thomson Corporation. All rights reserved.