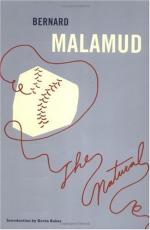 The Natural
Order our The Natural Encyclopedia Article

The Natural - Research Article from Literature and Its Times

Bernard Malamud
This encyclopedia article consists of approximately 14 pages of information about The Natural.

Bemard Malamud was born in April 26, 1914, and raised in Brooklyn, New York, the setting for much of his fiction. After earning a master's degree in English from Columbia University in 1942, he supported himself as an English teacher and wrote short stories for periodicals such as Threshold, American Preface, and Assembly. In 1952 he published his first novel, The Natural. He would go on to publish six story collections and six more novels, including The Fixer (1966), for which he was awarded a National Book Award and the Pulitzer Prize.

Scandals in baseball. Although the Chicago Black Sox scandal of 1919 serves in public memory as the most famous incident of its kind, it was in fact only one in a long history of scandals. In 1877 the Louisville Grays were only eight wins away from clinching the pennant...

The Natural from Gale. ©2008 Thomson Gale, a part of the Thomson Corporation. All rights reserved.