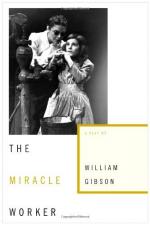 The Miracle Worker - Research Article from Literature and Its Times

William Gibson
This encyclopedia article consists of approximately 11 pages of information about The Miracle Worker.

William Gibson was born in the Bronx, a borough in New York City, in 1914. As an adult, he became fascinated with Anne Sullivan's famous triumph as the teacher of a deaf and blind girl named Helen Keller. Sullivan had herself been half-blind as a child and had experienced obstacles that confronted the disabled. Through Sullivan's letters, Gibson learned about the almshouses to which disabled children were often abandoned. Anne Sullivan's subsequent achievements, especially her heroic efforts to communicate with Helen Keller, served as the cornerstone of Gibson's play The Miracle Worker.

Almshouses. Institutions called "almshouses" or "asylums" sprang up in eighteenth-century America to house a wide-ranging collection of society's outcasts. Modeled on the English workhouse system, most almshouses tried to defray their costs by using inmates for forced labor. Male and...

The Miracle Worker from Gale. ©2008 Thomson Gale, a part of the Thomson Corporation. All rights reserved.