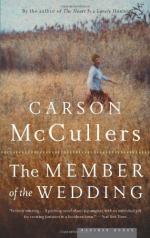 Carson McCullers
This encyclopedia article consists of approximately 13 pages of information about The Member of the Wedding.

Carson McCullers (1917-67) was born Lula Carson Smith in Columbus, Georgia, the model for Frankie Addams's hometown in the play. Although she experienced a relatively happy childhood, McCullers grew dissatisfied and bored with the restrictive life in a Southern mill town, where, she claimed, nothing ever happened: Like young Frankie Addams in the play, the adolescent McCullers considered herself a gangly, boyish outsider who was excessively tall, and she too dreamed of traveling to more exotic locales. In The Member of the Wedding, Frankie Addams's adolescent frustration and dreams manifest themselves against a backdrop of war, racial turmoil, and tumultuous changes in her Southern homeland.

World War II in Alaska and Luxembourg. When the play opens, the end of World War II is in sight. Frankie Addams, the...

The Member of the Wedding from Gale. ©2008 Thomson Gale, a part of the Thomson Corporation. All rights reserved.