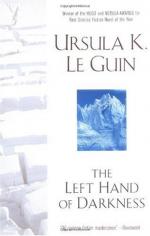 Ursula K. Le Guin
This encyclopedia article consists of approximately 14 pages of information about The Left Hand of Darkness.

Ursula Kroeber was born in Berkeley, California, on October 21, 1929. Her parents were Alfred Kroeber, an anthropologist of international repute, and Theodora Kroeber, who later became a successful writer. The Kroeber household was filled with books and interesting visitors, including graduate students, anthropologists, scientists, and Native Americans. As a girl Ursula was exposed to Norse mythology and Native American legend and literature of all kinds. She went on to cam degrees from Radcliffe College and Columbia University, marrying Charles Le Guin in 1953. Le Guin published her first novel, Rocannon's World, in 1966; it would become the initial work in the science fiction series that was to include The Left Hand of Darkness. This later novel appeared at the close of a decade fraught with conflict in the United States and abroad.

The Left Hand of Darkness from Gale. ©2008 Thomson Gale, a part of the Thomson Corporation. All rights reserved.