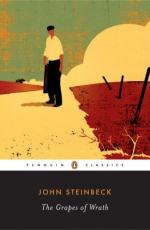 The Grapes of Wrath - Research Article from Literature and Its Times

John Steinbeck
This encyclopedia article consists of approximately 13 pages of information about The Grapes of Wrath.

Born and raised in California, John Steinbeck portrays in many of his writings the beauty and agricultural promise that attracted thousands to that state during the Great Depression. He also examines the social tensions resulting from the rapid growth in this state. The Grapes of Wrath focuses on the plight of newcomers who, promised plentiful jobs as farm workers, instead find themselves competing desperately for few jobs at rock-bottom wages.

Great Depression. Most Americans think of the Great Depression as beginning with the stock market crash of 1929. For some, however, like dry farmers in the southern Plains states, it started earlier. Dry farming-agriculture without irrigation-had boomed in the region since the railroad arrived in the late 1800s. Wheat and corn were the favorite crops, and wheat prices soared with the...

The Grapes of Wrath from Gale. ©2008 Thomson Gale, a part of the Thomson Corporation. All rights reserved.