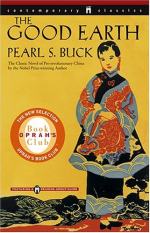 The Good Earth - Research Article from Literature and Its Times

Pearl S. Buck
This encyclopedia article consists of approximately 14 pages of information about The Good Earth.

Pearl S. Buck was born in China in 1892, the daughter of American missionary parents. After growing up in rural Chinese communities, Buck was profoundly affected by the difficult cycle of life experienced by China's peasant farmers and their families. Her third novel, The Good Earth, was written in an attempt to show the rigors of Chinese country life and to draw attention to the plight of the majority of China's population. The novel's incredibly poignant depiction of this simple rural life made it an instant success and brought Buck acclaim as one of the world's finest authors.

China's peasant farmers. Chinese civilization has always rested on an agrarian, peasant base. For centuries, between 80 and 90 percent of China's population has consisted of peasant farmers. The lives of these peasants are made...

The Good Earth from Gale. ©2008 Thomson Gale, a part of the Thomson Corporation. All rights reserved.