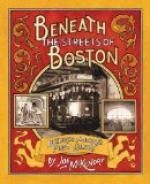 This encyclopedia article consists of approximately 6 pages of information about The First Subways.

The growth of railroads in the middle of the nineteenth century coincided with improvements in tunneling techniques. Underground railway service began in London in the 1860s, as a way to help ease street traffic problems. However, the coal-fired locomotives of the day created air pollution problems in the early subway tunnels. The success of the first electric subway, which opened in London in 1890, encouraged other cities to develop systems of their own.

In the early nineteenth century, city traffic was becoming unmanageable. Narrow, twisting lanes and dead-end streets built for foot traffic and mounted riders were being confronted with increasing volumes of coaches, carriages, and omnibuses. The congestion became a major civic issue in population centers such as London, Paris, New York, and Boston.

In London, the growth of the Thames dock system had led to extensive waterfront development on both sides...

More summaries and resources for teaching or studying The First Subways.

The First Subways from Lucent. ©2002-2006 by Lucent Books, an imprint of The Gale Group. All rights reserved.