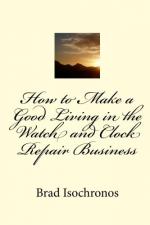 This encyclopedia article consists of approximately 5 pages of information about The First Clocks.

Water clocks and sundials were the first artificial measures of time. They allowed people to see time in an abstract way, apart from nature, and also helped create an objective, shared view of time that facilitated social cooperation. Combined with other measurements, such as those of space and weight, timekeeping devices ultimately provided the basis for science and contributed to new ways of understanding and controlling nature.

The first timepiece was probably a stick in the ground whose shadow showed the progress of the sun across the sky. Building on this principle were shadow clocks, or gnomon (Greek for "pointer"), which date from around 3500 B.C. This simple measurement, however, was soon insufficient. As humans established settlements and their societies grew, a common estimate of time became necessary for religious observances and to prompt or coordinate tasks, such as the time animals...

More summaries and resources for teaching or studying The First Clocks.

The First Clocks from Lucent. ©2002-2006 by Lucent Books, an imprint of The Gale Group. All rights reserved.