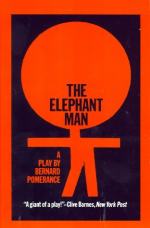 The Elephant Man - Research Article from Literature and Its Times

Bernard Pomerance
This encyclopedia article consists of approximately 14 pages of information about The Elephant Man.

Born in Brooklyn, New York, in 1940, Bernard Pomerance settled in England in the early 1970s with the ambition of becoming a novelist. He soon turned to drama, however, and became involved with various left-wing theater groups, writing and producing plays in London. The first play of his to gain wide recognition was The Elephant Man, which is set in the Victorian era and based on a true story. The play portrays the life of Joseph Carey Merrick, an extremely deformed man who was born in 1862. Highlighted in the play are the repressive social attitudes of Victorian society as well as the era's scientific ideas concerning evolution and survival of the fittest.

The Industrial Revolution. From roughly 1780 to 1850, England experienced phenomenal growth in industry. This growth was due to several factors, including...

More summaries and resources for teaching or studying The Elephant Man.

The Elephant Man from Gale. ©2008 Thomson Gale, a part of the Thomson Corporation. All rights reserved.