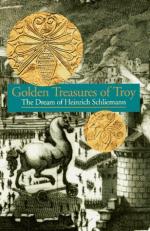 The Discovery of Troy - Research Article from Science and Its Times

This encyclopedia article consists of approximately 5 pages of information about The Discovery of Troy.

The ancient Greek poet Homer wrote of the city of Troy, but in medieval times its location was forgotten, and many doubted that it existed at all. An enthusiastic amateur, Heinrich Schliemann (1822-1890), was determined to find the fabled city. He actually did find the site, and a great treasure trove besides. However, his rather unscientific approach to archaeology led to mistakes and misinterpretations that continue to provoke controversy today.

The poet Homer lived almost 3,000 years ago, and his Iliad is considered to mark the dawn of Greek literature. Several of the plays of Aeschylus, Sophocles, and Euripides were based upon it. The Iliad is an epic woven together from shorter oral poems, and tells the story of a time when Greece was at war with a city on the coast of Turkey, across the Aegean Sea. The name of...

More summaries and resources for teaching or studying The Discovery of Troy.

The Discovery of Troy from Gale. ©2005-2006 Thomson Gale, a part of the Thomson Corporation. All rights reserved.