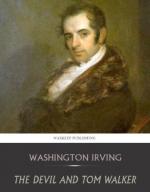 Washington Irving
This encyclopedia article consists of approximately 14 pages of information about "The Devil and Tom Walker".

Washington truing was born to a wealthy family in New York on April 3, 1783. He spent almost twenty years of his life in Europe. Influenced by a movement that romanticized the preindustrial Irving won an international reputation distinctively American writer. Both Europeans and Americans considered him to be the nation's first successful professional man of letters. "The Devil and Tom Walker" first appeared in the book Tales of a Traveler, which he wrote in Paris in 1824.

Puritanism. New England had been settled by Puritans in the early seventeenth century. The Puritans were a group of Protestants belonging to the Church of England who believed that the Reformation (in which the Protestant churches separated from the Roman Catholic Church) had not fully eliminated Catholic influence. Persecuted in England...

More summaries and resources for teaching or studying "The Devil and Tom Walker".

"The Devil and Tom Walker" from Gale. ©2008 Thomson Gale, a part of the Thomson Corporation. All rights reserved.