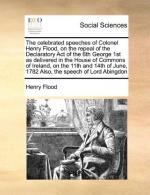 This encyclopedia article consists of approximately 5 pages of information about The Declaratory Act.

"The King's majesty … had, hath, and of right ought to have, full power to make laws and statutes of sufficient force and validity to bind the colonies and people of America, subjects of the crown of Great Britain, in all cases whatsoever."

From the Declaratory Act

In March 1765, the British Parliament passed the Stamp Act to raise money in America to help pay for British soldiers stationed there. The Stamp Act, scheduled to go into effect on November 1, 1765, taxed printed matter such as newspapers, legal documents, and even dice and playing cards. Much to Parliament's surprise, Americans protested the tax in the strongest terms, in many cases resorting to violence against British officials in America. They also refused to buy British goods.

It became clear that more British soldiers would have...

More summaries and resources for teaching or studying The Declaratory Act.

The Declaratory Act from UXL. ©2005-2006 by U•X•L. U•X•L is an imprint of Thomson Gale, a division of Thomson Learning, Inc. All rights reserved.