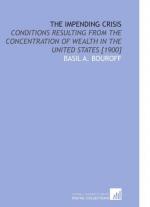 The Concentration of Wealth - Research Article from Development of the Industrial U.S. Reference Library

This encyclopedia article consists of approximately 10 pages of information about The Concentration of Wealth.

Excerpt from "The Concentration of Wealth: Its Economic Justification"

William Graham Sumner (1840–1910) was one of the leading social philosophers during the period of the Industrial Revolution known as the Gilded Age, which began in the early 1860s and extended to the turn of the century. The Gilded Age was marked by a rapid growth of industrialism and big business throughout the United States. Many Americans objected to the political and financial power the industrialists and big corporations gained during these years and were concerned that some businessmen were becoming very wealthy while a large number of workers were barely able to live on their wages. By the 1880s citizens were demanding the government regulate big business in order to lessen the influence of the...

More summaries and resources for teaching or studying The Concentration of Wealth.

The Concentration of Wealth from UXL. ©2005-2006 by U•X•L. U•X•L is an imprint of Thomson Gale, a division of Thomson Learning, Inc. All rights reserved.