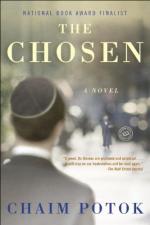 The Chosen
Order our The Chosen Encyclopedia Article

The Chosen - Research Article from Literature and Its Times

Chaim Potok
This encyclopedia article consists of approximately 14 pages of information about The Chosen.

Chaim Potok was born in 1929 in the Bronx, New York, the child of Hasidic parents who had fled Eastern Europe. After graduating from Yeshiva University in 1950, he went on to study for the Conservative rabbinate at the Jewish Theological Seminary of America in New York. He received his rabbinical ordination and a master's degree in Hebrew literature in 1954. From 1955 to 1957 he served as a U.S. Army chaplain in Korea. Potok afterward worked at the Har Zion Temple in Philadelphia and also wrote his Ph.D. dissertation, "The Rationalism and Skepticism of Solomon Maimon" for the University of Pennsylvania. His first novel, The Chosen, articulates the frustrations he felt as a Hasidic child denied a secular education and forbidden to pursue his artistic bent.

Hasidism. There is a variety of Orthodox Jews called...

More summaries and resources for teaching or studying The Chosen.

The Chosen from Gale. ©2008 Thomson Gale, a part of the Thomson Corporation. All rights reserved.