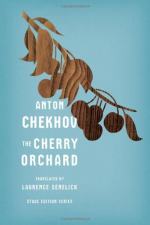 The Cherry Orchard - Research Article from Literature and Its Times

Anton Chekhov
This encyclopedia article consists of approximately 11 pages of information about The Cherry Orchard.

The son of a grocer, Anton Pavlovich Chekhov was born into a family of modest means in Taganrog, Russia, in 1860. Anton's father, Pavel, made some unsound business dealings, and in 1875 he went bankrupt and fled to Moscow, leaving his family behind. Anton Chekhov eventually moved to Moscow too, where he began writing as a career in order to support his family. Living in Moscow, Chekhov became one of Russia's foremost short story writers and dramatists. He later moved to Yalta, completing The Cherry Orchard, the last of his four major plays, less than a year before he died of tuberculosis in 1904.

The decline of the nobility. Over the course of the nineteenth century, the power of Russia's noble families eroded. Many of the families had incurred overwhelming debts. Landowners such as the...

More summaries and resources for teaching or studying The Cherry Orchard.

The Cherry Orchard from Gale. ©2008 Thomson Gale, a part of the Thomson Corporation. All rights reserved.