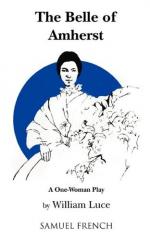 The Belle of Amherst - Research Article from Literature and Its Times

William Luce
This encyclopedia article consists of approximately 9 pages of information about The Belle of Amherst.

Emily Dickinson, a slight and sickly child and teenager, was forced to maintain most of her social contacts through letters, expressing her own feelings in poetry that she mostly kept from public view. William Luce, a late twentieth-century playwright, used Emily Dickinson's letters and poems to create a onewoman play about the poet's life as well as conditions in nineteenth-century New England.

The nineteenth-century family. In the typical New England household of the nineteenth century, each family member generally had his or her own responsibilities. The father's obligations centered around working outside the home and making most decisions. The mother, on the other hand, ran the household-cooking the meals, raising the children, and keeping it clean. Children were expected to behave, work hard in school, and help their parents...

The Belle of Amherst from Gale. ©2008 Thomson Gale, a part of the Thomson Corporation. All rights reserved.