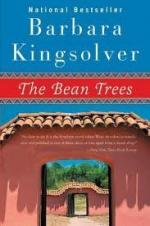 The Bean Trees - Research Article from Literature and Its Times

Barbara Kingsolver
This encyclopedia article consists of approximately 13 pages of information about The Bean Trees.

Bom in 1955 in Annapolis, Maryland, Barbara Kingsolver later settled in Tucson, Arizona, attended graduate school, and worked at the university there. Eventually she married and had a daughter, Camille-real-life experience for the fictional mother-daughter relationship created in her first novel, The Bean Trees. Prior to its writing, Kingsolver worked as a freelance journalist and before that as a technical writer. Her novels portray an especial sensitivity to everyday Americans-the shopowners, the unemployed, the single parent fighting to survive-and expose the strength that can be gained by their mutual support of one another.

Guatemalan refugees. The Bean Trees examines, in part, the lives and fates of a pair of young Guatemalan refugees, Estevan and Esperanza, who benefit from a sanctuary run secretly from Tucson, Arizona, to help them and other Central Americans avoid...

The Bean Trees from Gale. ©2008 Thomson Gale, a part of the Thomson Corporation. All rights reserved.