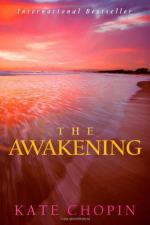 The Awakening - Research Article from Literature and Its Times

Kate Chopin
This encyclopedia article consists of approximately 13 pages of information about The Awakening.

Kate Chopin was born as Katherine O'Flaherty on February 8, 1851, in St. Louis, Missouri. In 1870 she married into the Creole family of Oscar Chopin and afterward lived in New Orleans, Louisiana. Kate Chopin came to know intimately the social eccentricities of this tight-knit ethnic group. Chopin's The Awakening explores the cultural realm of the Creole community, focusing also on the changing position of women at the turn of the century. Although Chopin professed no political connections with feminism, her story presents, through the person of Edna Pontellier, an independent and feminist character.

Events in History at the Time of the Novella

The Creoles. The term creole applies to the Louisiana-born descendants of the original French or Spanish settlers. Concentrated predominantly in New Orleans, the Creoles originally inhabited the "downtown" or northern half of the city above Canal Street known as the Vieux Carre. Although...

More summaries and resources for teaching or studying The Awakening.

The Awakening from Gale. ©2008 Thomson Gale, a part of the Thomson Corporation. All rights reserved.