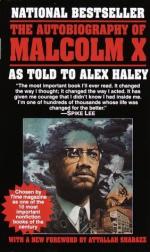 Malcolm X
This encyclopedia article consists of approximately 14 pages of information about The Autobiography of Malcolm X.

as told by Malcolm X to Alex Haley

Jn the late 1950s Alex Haley (1921-92) was a struggling African American magazine writer. His research for an article on the Nation of Islam led, in turn, to Haley's writing of an autobiography as told to him by one of the most controversial African Americans of his day, Malcolm X. When approached about the idea, the thirtyseven- year-old Malcolm hesitated but then agreed, deciding that the story of his life might be of benefit to others.

Passive resistance. On December 1, 1955, the civil rights-era tenet of passive resistance was born in Montgomery, Alabama, when Reverend Dr. Martin Luther King Jr., a pastor in the city, organized a boycott of the Montgomery city buses. King was responding to the arrest of Rosa Parks, a black...

More summaries and resources for teaching or studying The Autobiography of Malcolm X.

The Autobiography of Malcolm X from Gale. ©2008 Thomson Gale, a part of the Thomson Corporation. All rights reserved.