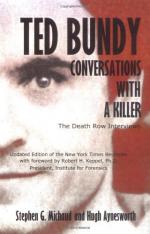 This encyclopedia article consists of approximately 9 pages of information about Ted Bundy.

Between 1973 and 1978 Ted Bundy murdered dozens of women, many of whom resembled his former girlfriend. During multiple investigations of men who fit the killer’s description, police overlooked him as a suspect because he presented himself as a successful, clean-cut law student and crisis hotline counselor. Bundy—who escaped twice from jail and presented his own courtroom defense—was executed by electrocution in 1989.

E. Louise Cowell was twenty-two and living at home in Philadelphia when she became pregnant. She was sent to the Elizabeth Lund Home for Unwed Mothers in Burlington, Vermont, where her son, Theodore “Ted” Robert Cowell, was born in 1946. With no means to support...

More summaries and resources for teaching or studying Ted Bundy.