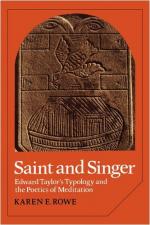 This encyclopedia article consists of approximately 6 pages of information about Taylor, Edward.

From Edward Taylor's poem "Upon a Spider Catching a Fly."

Edward Taylor was a Puritan minister in Westfield, Massachusetts, who wrote poetry to express his religious inspiration and beliefs. (Puritans were a Christian group who observed strict moral and spiritual codes.) The only verses by Taylor that appeared in print during his lifetime, however, were two stanzas from "Upon Wedlock & Death of Children" (1682 or 1683), which Puritan minister Cotton Mather (see entry) included in his book Right Thoughts in Sad Hours (1689). His work was virtually unknown until scholars discovered and published his poetry in the twentieth century. Yet today he is considered a major American poet, and his more than two hundred Poetical Meditations (1682–25) have been called the most important poetic...

More summaries and resources for teaching or studying Taylor, Edward.