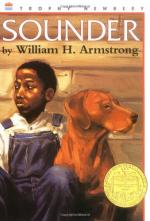 Sounder - Research Article from Literature and Its Times

Born in 1914 in Lexington, Virginia, white educator William Armstrong worked as a school headmaster and won recognition from the Association of School Administrators. Although he claimed to prefer stone masonry and carpentry to writing, he wrote books expressing his educational philosophy, beginning with Study is Hard Work (1956). More informational books followed, with titles like Peoples of the Ancient World, 87 Ways to Help Your Child in School, and Tools of Thinking. Armstrong then decided to retell a simple story he had heard as a child, scoring an instant success with Sounder.

Agriculture in the South. The Southern economy was based on agriculture, particularly cash crops such as tobacco and cotton. Although the Union army destroyed many crops and fields during the Civil War, afterward Southern agriculture rebounded quickly and continued expanding in the early twentieth...

More summaries and resources for teaching or studying Sounder.

Sounder from Gale. ©2008 Thomson Gale, a part of the Thomson Corporation. All rights reserved.