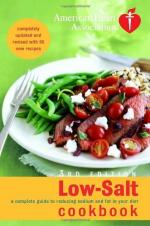 This encyclopedia article consists of approximately 3 pages of information about Sodium.

Sodium is the second member of the alkali family, the group of elements that make up Group 1 of the periodic table. Sodium has an atomic number of 11, an atomic mass of 22.98977, and a chemical symbol of Na.

Sodium is a silvery white metal with a waxy appearance. It is soft enough to be cut with a knife. When first cut, the surface is bright and shiny, but it quickly becomes dull as sodium reacts with oxygen in the air to form sodium oxide (Na2O). Sodium's melting point is 208.1°F (97.82°C), its boiling point is 1,618°F (881.4°C), and its density is 0.968 grams per cubic centimeter. Sodium is a good conductor of electricity.

Sodium is a very active element that combines with oxygen at room temperature and burns with a brilliant golden-yellow flame. It reacts violently with water to produce hydrogen gas, which may...

More summaries and resources for teaching or studying Sodium.

Sodium from Gale. ©2005-2006 Thomson Gale, a part of the Thomson Corporation. All rights reserved.