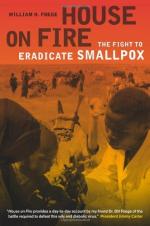 This encyclopedia article consists of approximately 5 pages of information about Smallpox.

Smallpox is an infection caused by the virus called variola (pronounced vuh-RY-uh-luh). Throughout history, smallpox has been a greatly feared disease. It has been responsible for huge epidemics worldwide. The disease has caused great suffering and many deaths. Smallpox is now thought to have been eliminated from the Earth. In 1980 the World Health Organization (WHO) announced that the disease had been wiped out by a bold program of vaccination.

The smallpox virus infected humans only. It did not infect other animals or insects. Neither could animals or insects transmit the virus from one human to another. The disease could be transmitted only by contact between humans. Sometimes a person came into contact with someone with skin lesions caused by the disease. Skin lesions are wounds produced by the virus. They were known as pox. A person also could catch the virus even if the infected person...

More summaries and resources for teaching or studying Smallpox.