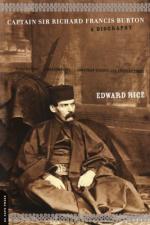 An adventurer with a gift for languages, Sir Richard Francis Burton was the first European to reach many of the once forbidden areas of the world, including many ancient Muslim cities, as well as Lake Tanganyika during his quest for the source of the Nile River. He wrote extensively of his travels, publishing 43 volumes and providing invaluable insight into the religion, lives, and customs of the people with whom he came in contact. In addition, he translated many texts of the East for Westerners, including the Kama Sutra and the definitive translation of Arabian Nights.

Born to a retired officer of the British army and his wealthy British wife, Burton was the oldest of three children. He and his brother and sister grew up in England, France, and Italy. By all accounts an unruly child, Burton nevertheless...