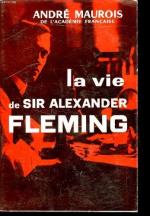 Sir Alexander Fleming - Research Article from Science and Its Times

This encyclopedia article consists of approximately 2 pages of information about Sir Alexander Fleming.

Alexander Fleming discovered penicillin, a "wonder drug" that ushered in the era of antibiotics. This new weapon against bacterial disease offered hope in fighting many infections that could not be treated effectively in the past. Together with Sir Howard Walter Florey (1898-1968) and Ernst Boris Chain (1906-1979), Fleming was awarded the Nobel Prize in 1945. In addition to penicillin, he also discovered lysozyme, an antibacterial agent found in tears and saliva.

Fleming was born on August 6, 1881, on a farm in Lochfield, Ayrshire, Scotland. He began his education in Scotland and then went on to London, where he received his medical degree in 1906 from St. Mary's Hospital Medical School at the University of London. He lectured there until World War I, during which he served in the Army Medical Corps. After the war he returned to St. Mary's, and in 1921 identified lysozyme. He...

Sir Alexander Fleming from Gale. ©2005-2006 Thomson Gale, a part of the Thomson Corporation. All rights reserved.