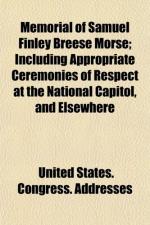 This encyclopedia article consists of approximately 6 pages of information about Samuel Morse and the Telegraph.

From the beginning of time, humans have sought ways to communicate quickly across distances. In ancient times, groups living far from each other would send messages via couriers traveling on foot, or by setting fires to create smoke signals. In the 1830s an artist-inventor named Samuel Morse (1791-1872) conquered the age-old problem of long-distance communication with his invention, known as the telegraph. Messages would no longer take days or even weeks to deliver, but could be transmitted across towns, across the country, even across the ocean, in a matter of seconds.

The possibility of sending messages electronically was born as early as the 1700s. An experimenter in London was able to send an electrical impulse one-sixth of a mile along thread in 1727. A writer in a 1753 issue of Scots Magazine described a static electricity telegraph that could spell...

More summaries and resources for teaching or studying Samuel Morse and the Telegraph.

Samuel Morse and the Telegraph from Gale. ©2005-2006 Thomson Gale, a part of the Thomson Corporation. All rights reserved.