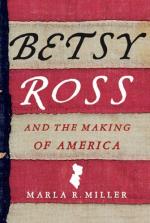 This encyclopedia article consists of approximately 8 pages of information about Ross, Betsy.

Betsy Ross, the legendary maker of the first American flag known as the "Stars and Stripes," was a successful businesswoman during the early years of the nation. Ross did not just supplement the family income as many women did in the early years of the nation; she actually supported her family with her business skills. She trained as a seamstress and apprenticed as an upholsterer before becoming an official flag-maker for the Pennsylvania State Navy Board. She resided in Philadelphia her entire life and experienced firsthand the effects of the American Revolution (1775–83). Ross lost two husbands to the war, and at one point her home was taken over by the British to lodge soldiers.

Disowned by the Quaker Society as a young woman, Ross became a faithful member of the new Society of Free Quakers. The...

More summaries and resources for teaching or studying Ross, Betsy.