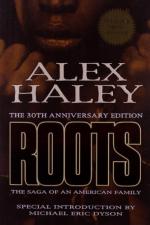 Roots: The Saga of an American Family - Research Article from Literature and Its Times

Alex Haley
This encyclopedia article consists of approximately 12 pages of information about Roots.

Born in Ithaca, New York, in 1921, Alex Haley was raised in Henning, Tennessee, by his maternal grandmother. Haley heard stories during his childhood about his heritage from his grandmother and from other elderly female relatives. As a young adult he joined the Coast Guard, and when he left the service he landed a job writing biographical stories for Reader's Digest, a journal that would eventually sponsor some of the research and travel that made Roots possible.

Events in History at the Time of the Biography

Life in Juffure. Roots begins with the mid-eighteenth century birth of Haley's ancestor, Kunta Kinte, in the small village of Juffure in the Gambia, a land in West Africa. The Gambia stretches along a narrow fertile belt (295 miles in length and between 15 and 30 miles wide) on both sides...

More summaries and resources for teaching or studying Roots: The Saga of an American Family.

Roots: The Saga of an American Family from Gale. ©2008 Thomson Gale, a part of the Thomson Corporation. All rights reserved.