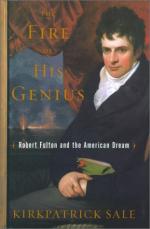 Robert Fulton - Research Article from Science and Its Times

This encyclopedia article consists of approximately 3 pages of information about Robert Fulton.

Robert Fulton is best known as the inventor of the first operational steamboat. However, he also developed an early submarine, canal designs, and patented machines for sawing marble and twisting hemp into rope. As one of America's first civil and military technologists, Fulton helped shape the worldview and ideals of modern mechanized society.

Fulton was born on November 14, 1765, in Little Britain Township, Pennsylvania. He spent most of his life in Lancaster, then the largest inland city in the American colonies. Lancaster was a hub of intellectual and technological activity during the American Revolution. Many historians believe the stimulation of this environment had a great impact on the young Fulton.

Robert Fulton. (The Library of Congress. Reproduced by permission.)

After the Revolution Fulton worked in Philadelphia as a portrait painter, and in 1786 traveled to England to study art; there he was a...

More summaries and resources for teaching or studying Robert Fulton.

Robert Fulton from Gale. ©2005-2006 Thomson Gale, a part of the Thomson Corporation. All rights reserved.