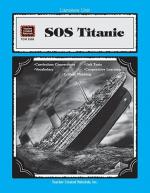 This encyclopedia article consists of approximately 8 pages of information about R.M.S. Titanic.

During the late nineteenth and early twentieth centuries—long before the days of air travel—there was a great need for large ships to carry travelers between the United States and Europe. The trip could be made in about two weeks. Wealthy, first-class passengers stayed on the upper decks of the ships, in rooms that were quite luxurious—like those of the best hotels. Second-class passengers stayed in more modest staterooms, located in the middle section of the ship. And underpriviledged passengers stayed in crowded third-class quarters on the back and lower decks of the boat, called steerage. At that time thousands of European immigrants hoping to build better lives in America made the trip in this way.

More summaries and resources for teaching or studying R.M.S. Titanic.