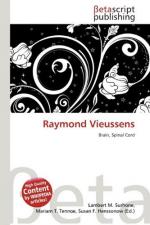 Raymond Vieussens - Research Article from Science and Its Times

This encyclopedia article consists of approximately 3 pages of information about Raymond Vieussens.

The son of François Vieussens, a townsman of Vigan, France, Raymond Vieussens was best known for his advancements in the knowledge of the brain and spinal cord. He received his medical degree from the University of Montpellier in 1670, then became chief physician at Hôtel Dieu St.-Eloi, the main hospital in Montpellier. Thereafter he divided his career between Montpellier and Paris, but held no university appointment. In the late 1670s he married Elisabeth Peyret, by whom he had twelve children. Two of his sons and two of his sons-in-law became physicians.

Favored and protected by the French aristocracy, Vieussens became wealthy through the patronage of royals and nobles. He was the personal physician of the Marquis de Castries, the Archbishop of Toulouse, and the Duchess of Montpensier. Even though he never treated King Louis XIV (1638-1715), he received...

More summaries and resources for teaching or studying Raymond Vieussens.

Raymond Vieussens from Gale. ©2005-2006 Thomson Gale, a part of the Thomson Corporation. All rights reserved.