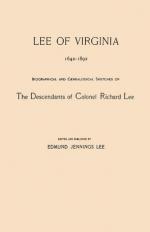 This encyclopedia article consists of approximately 7 pages of information about Randolph, Edmund.

Edmund Randolph was highly influential in the political shaping of America, particularly between 1776 and 1800, when he served as Virginia's first attorney general, Virginia state governor, the first U.S. attorney general, and the nation's second secretary of state. Coming from a family with a colonial legal background, Randolph was very intelligent and highly respected for his legal knowledge. Randolph played a key role at the 1787 Constitutional Convention, serving on a committee that developed an early draft of the U.S. Constitution.

Edmund Randolph was born in August 1753 to John Randolph and Ariana Jenings at Williamsburg, Virginia. Their home was called Tazewell Hall. The family was well established in colonial politics and legal matters, having moved to America from England in the mid-1600s. His father, uncle, and grandfather...

More summaries and resources for teaching or studying Randolph, Edmund.