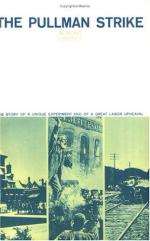 This encyclopedia article consists of approximately 11 pages of information about Pullman Strike.

The Pullman strike—also known as the Chicago strike, Pullman boycott, Debs Revolution, or the American Railway Union strike—was the most dramatic U.S. labor challenge to the power of capital in the 1890s. A local strike that expanded into a national boycott and strike, it grew to include outright class warfare. A turning point for the U.S. labor movement, especially the American Federation of Labor, it was also an economic and political turning point for the United States as a whole. While labor suffered a resounding defeat, the strike lent impetus to both radical labor currents and more moderate social reformers and led directly to what has become known as the Progressive Era of 1900 to 1920.

More summaries and resources for teaching or studying Pullman Strike.

Pullman Strike from Gale. ©2005-2006 Thomson Gale, a part of the Thomson Corporation. All rights reserved.