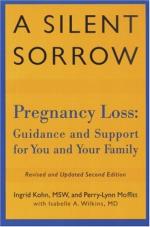 This encyclopedia article consists of approximately 8 pages of information about Pregnancy Loss.

There are various ways in which a pregnancy may be lost. Miscarriage means loss of an embryo or fetus before the 20th week of pregnancy. Most miscarriages occur during the first 14 weeks of pregnancy. The medical term for miscarriage is spontaneous abortion.

An abnormally weak cervix (the structure at the bottom of the uterus) is called "incompetent," and therefore it can gradually widen during pregnancy. Left untreated, this can result in repeated pregnancy losses or premature delivery.

A stillbirth is defined as the death of a fetus at any time after the 20th week of pregnancy. Stillbirth is also referred to as intrauterine fetal death (IUFD).

Miscarriages are very common. Approximately 20% of pregnancies (one in five) end in miscarriage. The most common cause is a genetic abnormality of the fetus. Not all women realize that they are miscarrying and others may not seek medical care when...

More summaries and resources for teaching or studying Pregnancy Loss.

Pregnancy Loss from Gale. ©2005-2006 Thomson Gale, a part of the Thomson Corporation. All rights reserved.