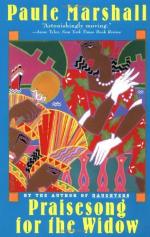 Praisesong for the Widow - Research Article from Literature and Its Times

Paule Marshall
This encyclopedia article consists of approximately 16 pages of information about Praisesong for the Widow.

Born in Stuyvesant Heights, New York in 1929, Paule Marshall was the daughter of immigrants from Barbados. She grew up in a largely immigrant community and, after graduating from Brooklyn College in 1953, worked as a journalist for Our World, a small black magazine. During her employment there, Marshall wrote her first novel Brown Girl, Brownstones (1959), which dealt with the issues of ethnic autonomy and assimilation. Later, she published a collection of short stories, Clap Hands and Sing (1961), and a second novel, The Chosen Place, the Timeless People (1969). While Marshalls works were well received, she did not become widely known as an author. Her third novel, Praisesong for the Widow, was not published until 1983, but then garnered critical praise for its unlikely heroine a well-to-do African American widowand her quest to rediscover her cultural identity.

Praisesong for the Widow from Gale. ©2008 Thomson Gale, a part of the Thomson Corporation. All rights reserved.