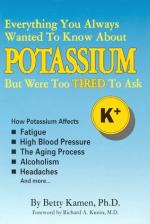 This encyclopedia article consists of approximately 3 pages of information about Potassium.

Potassium is the third element in Group 1 of the periodic table. The elements in this group are commonly referred to as the alkali metals. Potassium has an atomic number of 19, an atomic mass of 39.0983, and a chemical symbol of K.

Potassium is a very active metal that reacts violently with water to produce hydrogen gas: 2K + 2H2O 2KOH + H2 So much heat is produced in this reaction that the hydrogen gas tends to ignite and burn. Potassium also reacts readily with all acids and...

More summaries and resources for teaching or studying Potassium.

Potassium from Gale. ©2005-2006 Thomson Gale, a part of the Thomson Corporation. All rights reserved.